North Korean state-run media is reporting that Kim Jong Un made an appearance at a May Day celebration, which would be his first public appearance in about three weeks after global speculation over his health.According to the Korean Central News Agency (KCNA), Kim spoke publicly at an event to celebrate Labor Day and inaugurate a fertilizer plant.”When the Sunchon Phosphatic Fertilizer Manufacturing Plant goes into operation, it will represent a historical development in our country’s fertilizer industry, it will be a glorious revolution and a splendid display of our nation’s great economic potential, and it will be an uplifting banner that assures us of the achievements of our country’s general economic frontline,” Kim said, according to the KCNA report.The report added that Kim “expressed satisfaction about the wonderful creation” and congratulated staff from Kim Chaek University of Technology, “repeatedly stressing that talents are a great source and a motive power of the development of the country.”KCNA also released a still photograph purportedly showing Kim at the ceremony. The picture shows him cutting a red ribbon, with his sister Kim Yo-jong behind him. 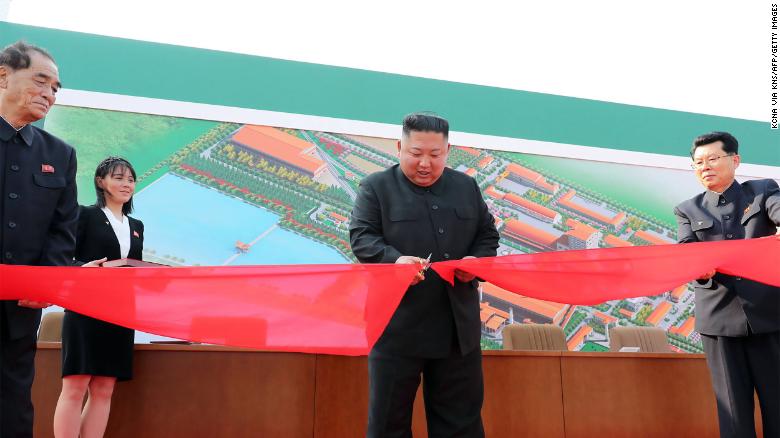 A photo released from North Korea’s official Korean Central News Agency on May 2 reportedly shows Kim Jong Un attending a ceremony to mark the completion of Sunchon phosphatic fertilizer factory in South Pyongan province. CNN cannot independently confirm the reporting of KCNA.CNN cannot independently verify KCNA’s reports, the authenticity of the photograph or the date it was shot.Questions were raised about Kim’s well-being after he missed the celebration of his grandfather’s birthday on April 15. He had been seen four days before that at a politburo meeting, according to KCNA.North Korean state newspaper Rodong Sinmun said Sunday that Kim sent thanks to workers who helped in remodeling the city of Samjiyon.CNN cannot independently confirm the authenticity of Sunday’s report and whether the note of thanks came directly from the leader.The same newspaper said Friday that Kim had “sent thanks” to exemplary party members for their work promoting party policy. The article did not give details for when or how his sentiments were expressed.It is not the first time North Korean media has reported on Kim’s activities since news of his potential health issues emerged.US President Donald Trump declined to comment on the May Day appearance report.”I’d rather not comment on it yet, Kim Jong Un. We’ll have something to say about it at the appropriate time,” he told reporters before departing the White House for Camp David.On Sunday, South Korean presidential adviser Moon Chung-in told CNN that the North Korean leader was “alive and well” despite speculation about his health.The adviser to South Korean President Moon Jae-in said Kim had been staying in the Wonsan area, on the country’s east coast, since April 13, adding: “No suspicious movements have so far been detected.”A website specializing in North Korean affairs published satellite images on Saturday that researchers said showed a train, “probably belonging to Kim,” which had been parked at a railway station serving his luxurious Wonsan compound on the country’s eastern coast since at least April 21.

Would have never allowed such lockdown if consulted by provinces: PM

German economy shrinks 2.2% in first quarter of 2020 due to coronavirus

35 Views ISLAMABAD (News10) – The Upper House of the Parliament, Senate on Friday has approved the State Bank of

Pakistan’s dollar inflows climb to 9.27b mark in first half of FY22

61 Views JEDDAH — Saudi Arabia’s cybersecurity sector has witnessed a high presence of women, with the rate of participation reaching

44 Views Pakistan appears to be poised on a knife-edge forever. If it is not under martial law, it is